The spinning top is a candlestick with a small body, a long upper shadow and a long lower shadow.

Its open is near to the close and its long shadows show that both buyers and sellers were active during  the market session. Prices moved higher and lower so none of them gained. A spinning top shows the points of indecision between the buyers and the sellers.

When a spinning top forms on an uptrend, it shows the weakness of buyers. Therefore there is a likelihood of a change in trend.

If a spinning top appears on a downtrend,  this signifies that the sellers are giving up on the market, therefore  a possible reversal in the direction of the market.

Funny as it sounds, so is its body.

A marubozu does not have the upper and lower shadows. It is just like a body with no head and limbs. The  high and low is equal to the open or close of the session. Very Interesting! isn’t it?

A blue Marubozu has a long blue body with no shadows. It’s open is equal to low and the close is equal to the high.This simply means that the buyers controlled the market from the beginning to the end of the session. It is more  bullish, if a blue marubozu appears in an uptrend giving a strong continuation of the trend.

If it appears on a downtrend, there is likelihood of a change in direction.

Sellers control the market from the beginning of the session to the end.

It is a bearish reversal pattern.

If a red Marubozu appears in a down trend, it shows continuation of a down trend while  if it appears on an uptrend , there is a possibility of a change in direction of the trend.

To use a Marubozu as a signal for entry, you need to wait for confirmation on the candlestick that forms after a Marubozu.  Let’s take a look at an example below. 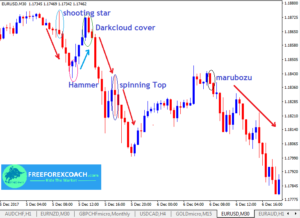 In our chart above, note that after formation of the marubozu pattern,the next red candlestick confirmed continuation of the down trend