How to trade Bullish Rectangles

Bullish Rectangle Pattern in Forex is a bullish continuation pattern. It forms  in an uptrend defining the horizontal levels of support and resistance.

This indicates equal strength between the buyers and sellers in the market. It is possible that price will continue in its initial trend direction after the completion of the pause.

What is a  bullish rectangle pattern in forex

The bullish rectangle pattern forms  in an uptrend defining the horizontal levels of support and resistance.

Price bounces up and down between the horizontal support and resistance line. It maintains its highs and lows forming trading range inform of a rectangle.

Take a look at the illustration below; 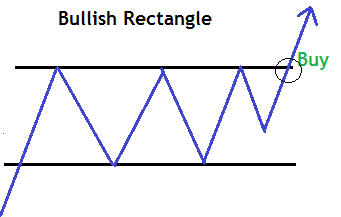 A bullish rectangle pattern is normally seen after a sharp rally of prices in uptrend.

Formation of a Bullish rectangle Pattern on Forex chart

In the example above,

We can clearly see that the price stayed between the two key price levels which are parallel to one another.

When trading rectangles, it is possible that price can breakout on either sides.

It is therefore very important to always wait for the breakout as a confirmation of the pattern before taking any trade.

How to trade the pattern

When trading a bullish rectangle pattern in Forex , its important to always wait for a breakout confirmation on the resistance level.

Guidelines on how to trade the Bullish Rectangle Pattern

Alternatively, you can take your trade position after a price retest on resistance after the breakout.

All in all,the confirmation entry signal comes after the close of the bullish candlestick after the breakout.

Now that we know how and when to take position on a bullish rectangle pattern, let’s see how to estimate target profit on trade.

Set your stop-loss slightly below your entry point below the next low.

To determine the target point, measure the distance between the support line and the resistance line i.e the height of the rectangle. Then project same distance upwards after the breakout from the resistance level.

Therefore, your target point from entry point should be equal to the distance between the resistance and support line of the rectangle.

Let’s take a look at the GBPCHF, H4 chart below;

The buy signal is at the break of the resistance.

Stop loss is set slightly below the next low below the resistance.

The target Profit is got by measuring the height of rectangle (H) and projecting that same distance (H) upwards as shown in the chart above.