What is Economic Calendar?

Use it below; Dont Forget to Change Time to your Time Zone

Why you should use the economic Calendar

In Forex, you can only trade Currencies in pairs. For example, USD/CAD, EUR/USD, GBP/USD to mention but a few.

Most traders and investors use the  economic calendar to predict the future performance of the country’s economy.

A change in the major fundamental factors of one country affects the price movements of the currency pair.

As a Forex trader, it is very important to know the current market sentiment/trend direction before making any decisions to trade. It is easy to predict the news, but you can never be sure which direction the market will take.

With the economic calendar, you can prepare to trade or make necessary adjustments on your open positions.

For example, suppose you are trading the USD/CAD  pair.

This pair consists of two currencies; U.S.D dollar and CAD. The U.S. dollar currency represents the USA economy, CAD represents the Canadian economy. In this case, you will look at the economic events that come from the U.S.A and Canada.

Let’s say, Crude oil inventories from the USA or interest rates or NFP.  This is the most volatile news for the USD/CAD. Every release of any of this news, the market moves to its highest peak. If you want to confirm that, always follow the Gold price chart.

Many Forex brokers provide Economic Calendars on their platforms. If your broker doesn’t have such provision, you can access it on almost all Forex websites.

You can access the economic calendar right here at our site(freeforexcoach.com) with many other tools that will help you through your trading journey. It is simple and easy to interpret.

How to interpret the economic calendar?

The time the economic news is released;

The calendar displays the days of the week with the date on which the news data is to be released. It also shows events of the future and previous ones.

For example, if you take a good look on the figure below, you see provisions for yesterday, today, tomorrow and the whole week in general.

So, in case you need to find previous data for comparison, select the period. If you want data for the whole week, you can select that too. All you do is select the right period on the calendar.

Below is the figure showing how you can choose the correct date for the data you intend to view.

The time of data release.

Next thing you should look at on the calendar is the time of the news release.  Adjust the time zone to match the time for the region in which you are trading from.

Time Zone Settings for the Calendar.

It is vital to set the clock displaying the time of the news event within your time zone settings. To do this, click on the top right hand corner on the clock.

It will display different time zone options. Choose the setting of the clock that coincides with your trading charts and your trading platform.

You now know the exact time when a news announcement is due in real time.

How to set and choose the correct time for the news release, take a look at the figure below. 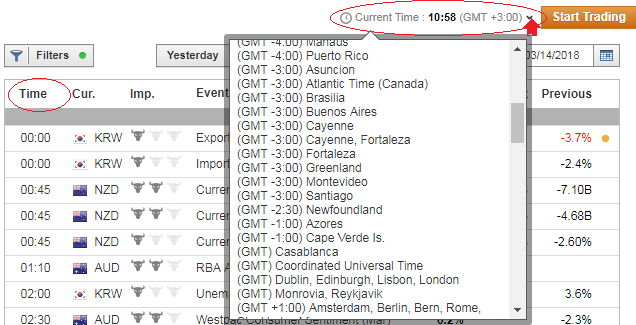 The currency that is going to be affected;

You must know which currency or currencies of the respective economies.

If news is coming out of Euro zone, then the Euro is going to move. Focus on Euro pairs mostly. If the news is from U.S.A, certainly the U.S dollar pairs will make the largest moves.

Some countries highly depend on one another for their economies. In this case, when news from one country is released it is likely to affect its trading partner highly.

For instance, news release from China, highly affect the Australian dollar since most of Australia’s exports go to China.

Also, Crude oil inventories from the U.S.A also highly affect the Canadian dollar since the U.S.A is the major oil importer from Canada.

The flag icon on the calendar identifies the currency. It represents the country releasing data, and the currency symbol is put next to it.

Take a look at the figure below. 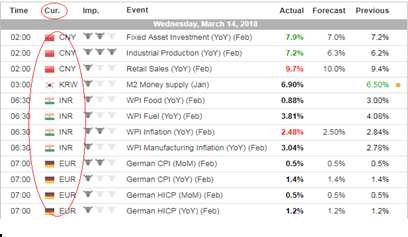 Just click on that particular country you are interested in on the calendar.  You will view the news details. Let’s take a look.

Different news release has different impact on the country’s currency value. Level of volatility in Forex trading shows this effect.

Volatility is an indicator of the expected impact of a data on currencies.  From the calendar, black honed head symbol represents Volatility.

When there are three (3) heads on any event, market observers expect this data to have high volatility. When the heads are two (2), news volatility is moderate. If it is one (1), it is Low volatility.

Impact on the market.

All economic calendar indicators have provisions for the previous , fore-casted and the actual numbers.

The Previous number is the data last released previously. It can be last month, last quarter or year). The Forecast number: this is a general agreement of experts and the analysts on the outcome/expected of the number.

The Actual is the final data release.

When the Actual data is released, it’s immediately displayed at the right of the events before forecast and the previous data. Better or worse than expected?

Gross Domestic Product (GDP) measures the annual change in the inflation-adjusted value of all goods and services produced in the economy.

Investors use GDP to gauge the state of the economy and adjust their expectations.

If the GDP turns out better than expected, it’s a signal for future economic growth of the country’s economy. The reading is more positive/ bullish for that currency while a lower than expected reading is negative/ bearish.

NFP measures the change in the number of people in employment during the previous month. This excludes the farming industry in the US.

The Unemployment Rate measures the percentage of the total work force with no employment but actively seeking employment in a country.

Consumer Price Index (CPI) measures the changes in the price of goods & services purchased by consumers.

If the CPI is below the goal of monetary policy, there is a chance for future interest hike. This depends on the communication coming from the central bank.

– Industrial Production measures the change in the total inflation-adjusted value of output produced by manufacturers, mines, and utilities.

Retail Data – Retail Sales measure the change in the total value of inflation-adjusted sales at the retail level. It is the foremost indicator of consumer spending. It accounts for the majority of overall economic activity.

The central bank board members come to a consensus on where to set the rate. Traders watch interest rate changes closely. Short term interest rates are the primary factor in currency valuation.

The Energy Information Administration’s (EIA) Crude Oil Inventories measures the weekly change in the number of barrels of commercial crude oil held by US firms. The level of inventories influences the price of petroleum products. This has an impact on inflation.

If the increase in crude is less than expected, it implies greater demand, so bullish for crude prices. Also if a decline in inventories is more than expected.

Factory Orders measures the change in the total value of new purchase orders placed with manufacturers.

The report includes a revision of the Durable Goods Orders data released about a week earlier. It also data new data on non-durable goods orders.

Employment Change measures the change in the number of people in employment. Job creation is an important indicator of consumer spending.

Monetary Policy Statement contains the outcome of the central bank’s decision on asset purchases. It also includes commentary about the economic conditions that influenced their decision.

Trade Balance measures the difference in values imports and exports. A positive number indicates that more goods and services were exported than imported.

The Purchasing Managers’ Index (PMI) measures the activity level of purchasing managers in the manufacturing sector.

Purchasing managers have early access to data about their company’s performance. This acts as a leading indicator for the overall economic performance. So Traders watch these surveys closely.

How to trade using the news release

On news release, we expect one of the three things to happen. The news will either appear better than expected, less or the same.

If the actual data coincides with or is the same as the (predicted) values, the market reaction is slow or no movement at all.

If the actual data is better than fore-casted, the market gives a sharp movement to the upside .The  greater the difference, the stronger this reaction is.

The major events that are likely to bring such movements include; the employment rates, statements and press conferences, GDP & any other important news.

Take a buy position order when the news comes out better than expected for the county’s currency or a sell position when the actual news is less than expected.

It is always important to take note of the market sentiment every after news release. The market does not always react to the news direction but this happens on rare cases.

Learn more on the different ways to trade news.