At the sight of highs in an uptrend always gives us a signal for the start of a down trend so you can warm up for the count down to trade the Elliot wave.

Otherwise if you have been watching a downtrend wait for the trend to form bottoms.

Let’s now go through the process of identifying trading opportunities on the Elliot wave.

How to trade elliot waves in forex

Label the first move down as Wave 1 and the retracement as Wave 2. 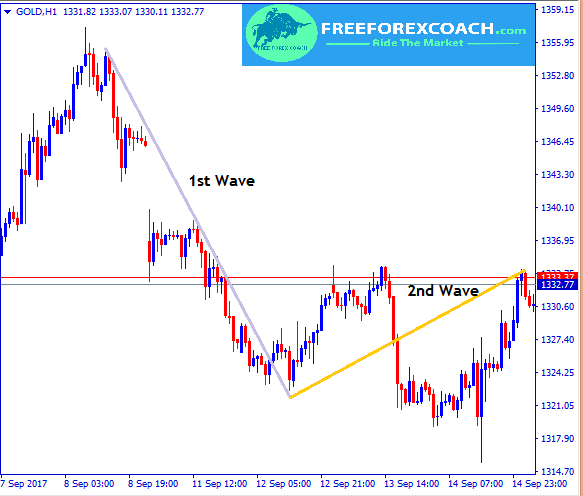 As you wait up on the next wave,  try to remind yourself of the 3 rules of Elliot wave. Since it’s the beginning of the count down, this is what you should ask yourself;

What does Elliot say about wave 1 and wave 2???

Well, Wave 2 cannot retrace more than Wave 1, then get back to your chart and checkout.

Yes! from the above chart,  still on point. You can now comfortably proceed with the wave count and entries. 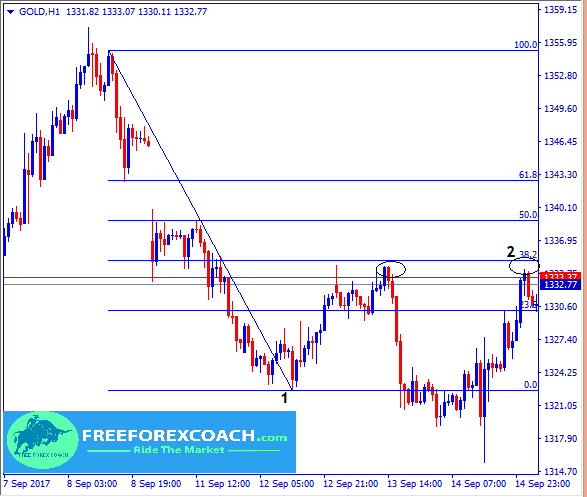 From our GOLD Hourly chart above, Price is just relaxing at level 38.2% of the Fibonacci retracement, so Wave 2 is valid.

Wave 3 is the strongest and never the shortest among the three motive waves so we expect a very strong movement ahead.

We now know that wave 3 can never be the shortest and wave 2 can never go beyond wave 1.

Since Wave 2 has already respected level 38.2% of the Fibonacci level, we can take this chance and take a Sell trade as wave 3 starts.

Our stop-loss above the high of the retraced level on completion of wave 2.

Therefore from the this statement, our first target would be on the 161.8% retracement level as shown on the chart below. 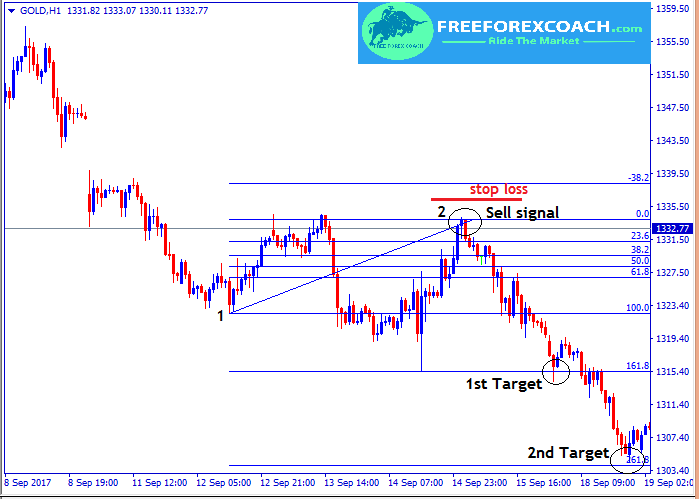 That was such a huge amount of profits for every trader not to miss.

Lucky enough Elliot wave strategy is free and available to use. All you need is to learn how to trade elliot waves in forex and practice till you get the whole concept.

And this is all we’re doing in this interesting lesson! To help you grab the whole concept!

If you practice this, you will be able to trade elliot waves in forex profitably.

Elliot theory has 5 major waves. You just have to stick with your Fibonacci retracement tool and  move on with the countdown. Now let’s go ahead.

The third rule states that,

Wave 4 corrects wave 3 and can not enter the territory of wave 1 otherwise Elliot wave becomes invalid.

So your next signal trade is to trade the wave correction i.e start of Wave 4

Buy signal entry is on the completion of Wave 3.

stop-loss slightly below the retracement level below your entry point.

So basing on that, our immediate Take profit target would be at 38.2% as shown on our chart below.

Finally we get to the last wave of the first 5 waves to trade Elliot waves in Forex.

Wave 5 always makes a strong rally due to the traders’ confidence in the market.

This is the time when the market is at its climax and so the strength of trend is based on the traders’ confidence in the value of the asset.

Wave 5 is the final leg in the direction of the dominant trend.

From the above chart,

We shall see more of Gold prices falling further as more traders liquidate their accounts due to specific reasons on ground.

This may lead to a very sharp spike move down as a result of a sharp fall in prices.

So you can take advantage of this period,

Take a Sell trade as wave 4 completes on level 38.2% of the Fibonacci retracement i.e start of Wave 5.

Let’s take a look at our chart once more 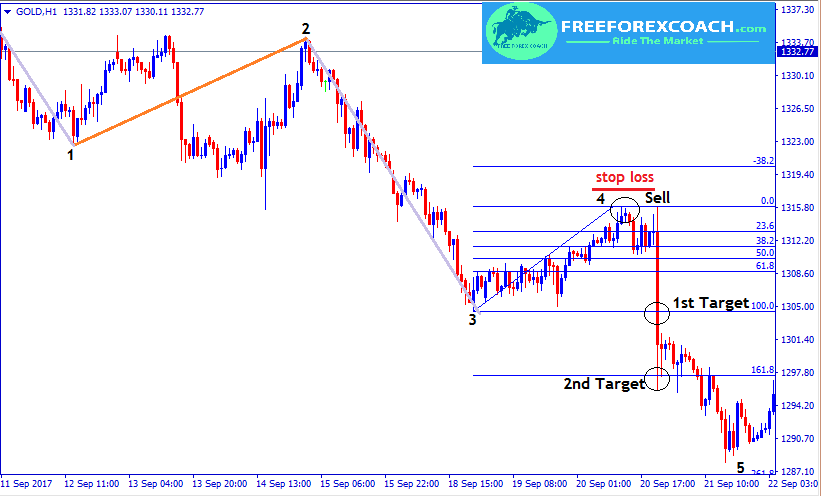 Stop loss is placed just above the entry on the next level of retracement.

Since wave 5 is not always too large, the immediate profit target level is 100% and next target is 161.8% retracement of Wave 4 as shown above.

At last the 5 impulse waves are complete. Take a look at the chart below; 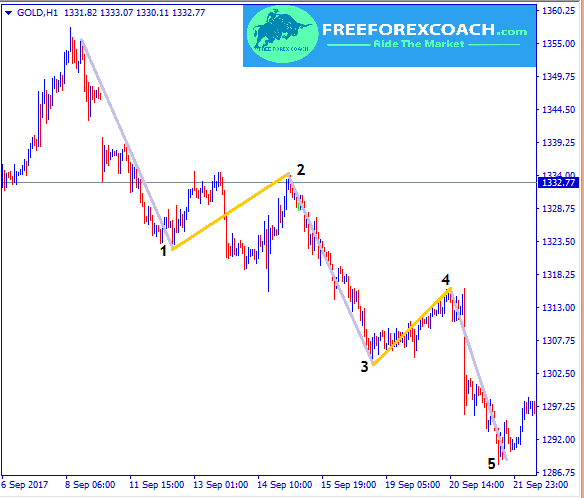 Of course next after the Impulse waves is the Corrective wave.

Just as we discussed before, as the Elliot wave completes the 5th  wave.

It is corrected by the 3 waves.

These waves are marked A,B,C and appear in different forms such as side ways, triangles, zigzag and others as earlier illustrated.

After the completion of the corrective waves a new trend begins.

So you can start a new countdown at the end of the corrective waves.

Take a look at our example below; 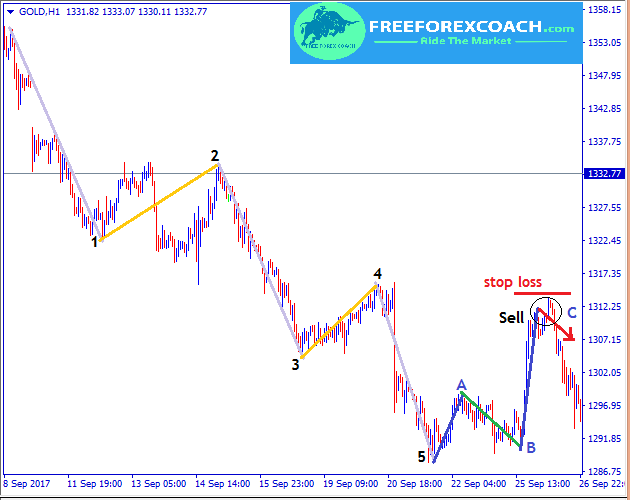 For example in our chart above,

It was a Sell signal.

Our stop-loss above the high of the retraced level on completion of wave C.

The immediate Profit target will be 161.8% retracement of 5C

I know this sounds like a dream come true. Just one Elliot wave can get you on vacation

Once you have identified the first 2 waves you trade till the correction of the Elliot wave.

If you use a good position size you can make quite a lot of money from a single set up,”the Elliot wave.”

Otherwise practice & practice more. You could share your findings and queries with fellow traders on the forum HERE 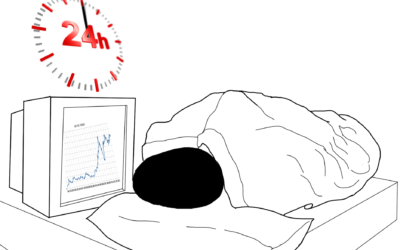 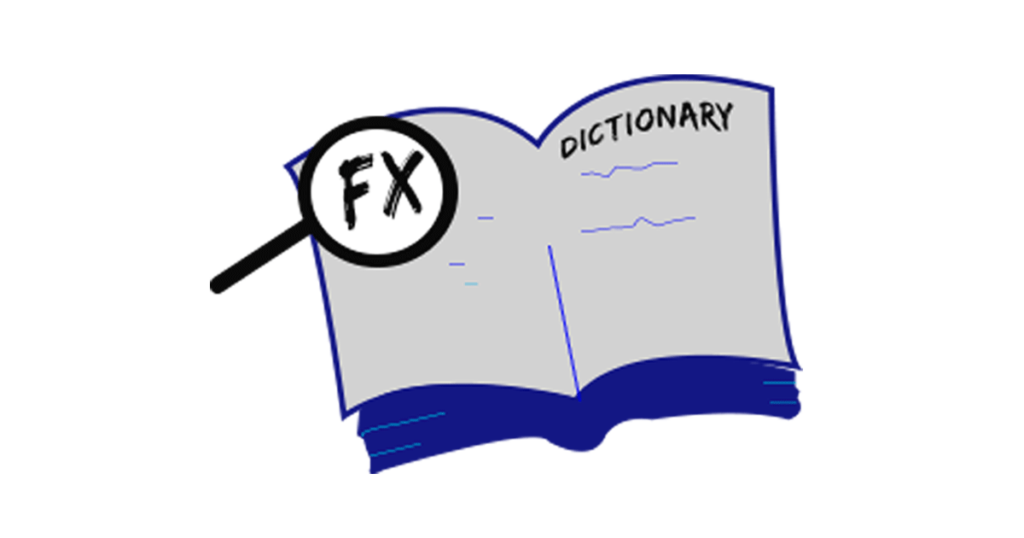